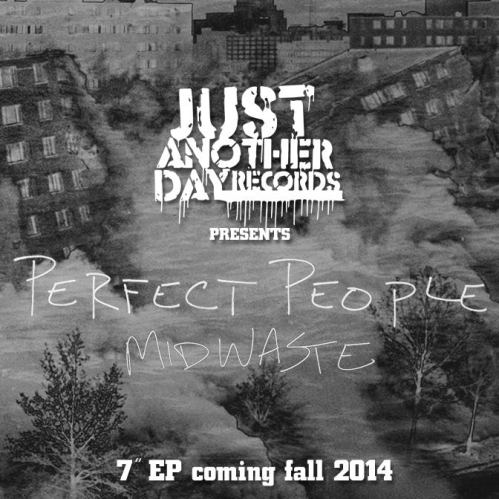 St. Louis-based hardcore band Perfect People has announced their debut 7-inch. The record will be titled Midwaste and will be out in early September on Just Another Day Records. The band is the current project featuring past and present members of notable St. Louis bands such as Cardiac Arrest, Resolve, Sore Throat Syndrome, and Can We Win. Preorder information for Midwaste will be available soon, but album art, track listing, and two new songs can be found at the label’s Bandcamp page.

FFO: Count Me Out, Right Brigade, Sinking Ships and Have Heart.

Just Another Day Records was resurrected back in April after a good 4 years hiatus. Back then it was run by a guy in Belgium, but it has now relocated to Copenhagen, Denmark and is back in business with Midwaste being the first new release since 2010.

I asked James (guitar) and Drew (vocals)  of Perfect People a few questions:

DR: Midwaste will be out in September and is your debut release. How was Perfect People born?

Drew: Perfect People officially began in early 2012. I had known the 3 original band members (Finney, Darrell, and Travis) from their previous band, Sore Throat Syndrome. There used to be an online message board for everything related to St. Louis DIY punk, hardcore and metal, and one of them had made a listing saying something like, “We have some songs written and need someone to sing over them.” So I scheduled a tryout, brought along some of my notebooks of lyrics, and by the end of that first tryout session, we had a song written. A few days later, they told me I got the gig, and we started working together.

James:  I actually joined the band a year or so after they formed. I had been trying to join Perfect People for a while, then finally they all talked it over, I practiced with them once and played my first show with them on 9/11/13.

DR: The discography tape is great, but Midwaste is on a whole other level. I guess you put some time and money into this release, because it sounds incredibly.

Drew: A lot of what makes the 7” such a step up from the demo recordings is just the overall growth as a band. When the first demo was recorded, the band had 6 songs already written, and I put lyrics over them. By the time we did the second demo (the last 6 songs on that tape), we had an idea of what our writing process was like: they knew how I wrote lyrics, and I knew how they wrote music, so we could each write separately with that in mind. When it came time to write the Midwaste songs, we had an even better understanding of how our band works. In fact, I don’t think I’ve ever had such an easy time clicking with a group of musicians like I do with these guys, and I think that really comes through on the record.

James: The Both Demos tape is kind of a hodge podge of recordings. The lead guitar, bass and drums were all recorded by our drummer Travis in his house. The vocals were recorded by a friend of Drew’s some months later and after I joined the band, I recorded at a local studio and added my guitar parts. All of this was done in peoples houses for free. When we were initially talked about doing a 7″ we all decided that we wanted to record at Firebrand Studios here in St. Louis. We dropped a lot of money on the recording but in the end we all agree that it was worth it. Brian at Firebrand did a great job with the recording, mixing and mastering of the record and we couldn’t be more grateful for all the time and effort he put into our project.

DR: Just Another Day Records recently relocated to Denmark from Belgium with a new guy running it. Why is a Danish label releasing a 7″ by a St. Louis band?

James: Our other band Resolve worked with the previous owner of JAD to put out an LP and a 7″. After the label went under, we never got those 7 inches until the resurrection of the label happened. He managed to salvage a number of copies and sent us a stack of them. That really stuck with me, so when I saw the JAD Facebook post about looking for demos of newer bands, I sent him the 7 inch to see if he’d be interested in putting it out. Working with JAD has been an amazing experience and we couldn’t ask for a more supportive label to work with.

DR: The lyrics on Midwaste are quite emotional, but in an aggressive manner. Experiences with lost love and family issues delivered with a sledgehammer – Is this your way of coping and making distance to the aforementioned themes?

Drew: I like to write songs about topics or situations that bother me. I think it’d be sort of weird to be yelling my head off about the things that make me happy, y’know? So when I’m writing, it’s usually with the intentions of helping myself understand my own situations in life. If anything, I’m not attempting to distance myself but to gain an acceptance of various aspects of my life in order to rectify the situation. I suppose it’s an overly elaborate process of having to admit a problem before I can solve it.

DR: The first time I read the lyrics, I got a strong Have Heart vibe – without focussing too much on comparison – because your voice makes it all just a bit more pissed off and angry. I guess this wasn’t something you deliberately went for, but are you surprised at that comparison?

Drew: I am surprised by that comparison, actually. In the past, I was really guilty of ripping off specific bands that I liked when I wrote lyrics or music. For Perfect People, I intentionally tried to not rip off anyone; I wanted to say what I was thinking without channeling my words through some other band, if that makes sense. But I’m certainly not upset by the comparison at all! It’s kind of flattering, so I will definitely take it as a compliment!

Drew: The St. Louis scene is super cool. It’s a tightly knit little group of people, most of whom are in bands themselves, all supporting each other. And there are sort of two scenes at once: we have the bands like us who play the type of hardcore directly influenced by bands like Youth of Today, Gorilla Biscuits, and the more modern B9-style bands; then there are the basement bands—the grungier bands who find inspiration from the earlier punk bands. Every now and then, you’ll find people who transcend the divide and attend both types of shows, but a lot of people stick with their own group. One day, I think, we’ll get both the sub-scenes together, and it’ll be a bit more cohesive. But until then, I’ll just keep encouraging people to check out every band they can.

James: I think St. Louis is a city that doesn’t know what it has. There’s such a broad range of punk and hardcore here that a lot of people haven’t heard due to shows being at certain venues or just a difference in the crowds. Bands like Lumpy and the Dumpers, Out of Time, Q, Rüz, Cardiac Arrest, Everything Went Black, Lamentors and Life Like. All of them bring something different and it’s so cool to see those bands progress and be able to be a part of that progression. There’s a certain bond that goes with being a band from the Midwest. It’s been said a hundred times, but I feel like band from this area DO have to work harder to make a name for themselves.

DR: What lies in the future for Perfect People?

James & Drew: We’re going to continue writing, so there will be another release in some form or another soon enough. Hopefully we’ll be playing out of town more often and try to hop on some fests. It’s tough because some of us have full time jobs, others are in school still, and one of us has a wife and baby, so longer touring isn’t exactly in the cards right now. But we’ll just keep doing what we’re doing for now ‘cause it’s worked out well so far.

Perfect People have 2 gigs lined up at the moment:

Check them out on the label’s bandcamp or attend the shows if you live in the area. Midwaste is definitely worth a listen!