Sorry Tieuma, I really don’t try to encroach on your territory – by that I mean your “Crucial Records” section which is, in my humble opinion already efficient (“Don’t Forget The Struggle, Don’t Forget The Streets”, “Why”…) – but since my mailbox has been fullfiled with some of my all-time fav 7” I could not help to succumb to the temptation of writing something about these gems…  I felt sorry bro!

This is actually actually why I decided to entitle this post “Records collectors definitly are pretentious assholes” – I promise: I’ll listen to a looping WARZONE’s “In The Mirror” playlist during shower time this morning!

You already know I’m a fucking NYHC addict. Last week, someone from Neitherlands posted on a Facebook Group Page that he wanted to sell a huge collection of 7″ – mostly Youth Crew records actually – but when I found out that these two original records and a second press formed part of that increasing list of maybe 250 items (at lower prices according to Discogs!) I could not help to purchase them – plus, since I recieved them and flipped them maybe dozens of times now, they really are in VG+ condition!

So, In alphabetical order:
1/ BREAKDOWN “The ’87 Demo” – Blackout! Records, Noiseville

Indeed, this one’s definitly a must have when you take a look to the massive vintage craze for this 7″ nowadays – it’s almost easy to forget that they released two shitty full-length in 1998 and 2000…  Luckily, Painkiller Records and 540 Records released in 2014 a good “early days”compilation LP I already own…
Well, if you’re a nerd like me you already know this vinyl version contains that crazy insert… 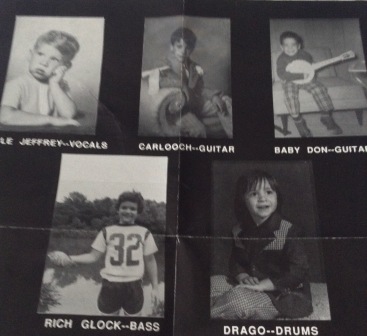 Yeah, these childhood portraits lightly contrast with the heavy sound of that record, the fucking frustrated lyrics obviously written with a pair of boxing gloves:

“Being fucked over just made me strong…”

“Do whatever feels right to you
There are no guidelines to follow in life
It’s hard to do at first, that I know
But where’s the gain without sacrifice…”

“Don’t pile me with problems that are fake
Face reality, you’ve got nothing at stake
[..,] And I really wonder why you want to be mad…”

Actually, it speaks for itself. In case someone who plays in the band reads what I’m writing, I want him to know that I will never thank him enough for taking part in that release. This record is REAL-LY important for me. 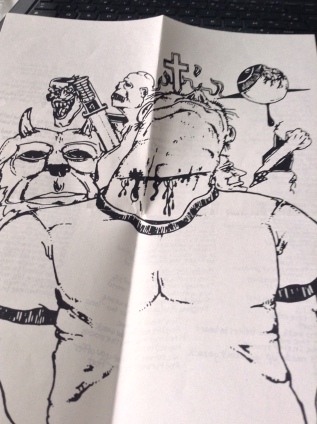 Where the fuck was Sean Taggart???
There’s a “Hardcore – Live it or leave it” mention when you flip that insert. No matter if it’s 1988 (this year reminds me that I won’t write that much about this 7″ cause it definitly belongs to my “1988 Section” on DxR) or 2015: it’s still the same fight!

Ok, haters gonna hate: the “Featuring Roger, Vinnie and Will from Agnostic Front. Introducing Freddie, Roger’s 12 year old brother.” sticker is missing… I think this is the reason why this record didn’t cost me “much” (well, it’s all about proportions…duh). Anyway, do you recognize that picture? 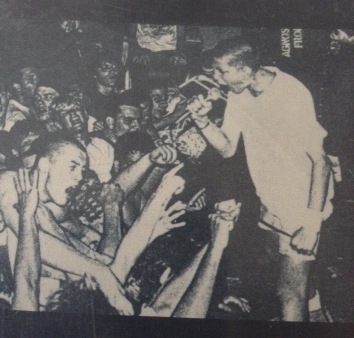 The same I posted months ago, but we can’t see the S…DRIVER logo! Funny isn’t it!

Anyway, this 7″ is just great. Even legendary. I’m a bit pissed when I stare at what MADBALL became… But I’m still indulgent when I consider that every real hardcore fan thinks this 7″ is dope…