Day of Rights – The few and the proud 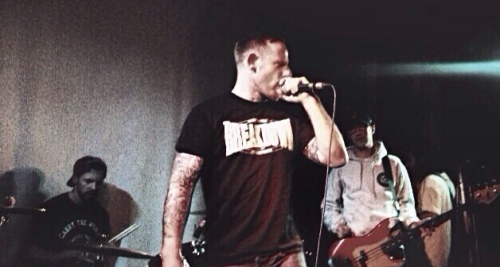 A few years ago the cultural bermuda triangle that exists between Sussex and Kent was spewing out high quality and varied hardcore bands like nobodies business. Shows were plentiful and with the support of the prolific semi-local record label Carry The Weight, it certainly appeared that the South had indeed risen.

In 2015  things are looking barren. Scene lynchpins Breaking Point have just announced their imminent demise, Final Rage packed it in a few months ago, Ego Trip, Inherit and Unholy Majesty are all missing in action. Lulls like this are inevitable as key players grow older and the weight of adult responsibility initiates a shift in priorities, and it reaffirms the point that it is important for EVERYONE to play an active role in keeping things moving along and not fall into the habit of relying upon the same handful of proactive people to *ahem* carry the weight.

Day Of Rights are a new Straight Edge band that is, needless to say, made up of the aformentioned same handful of proactive people. Essentially a 2.0 version of SRH standard bearers Coldsnap, Day Of Rights plow a distinctly similar sonicfurrow to their previous incarnation whilst adding a hefty twist of metallic hardcore to their brew. The bands key influences are evident in opener Enslaved which borrows heavily from Merauder’s metal influenced take on NYHC, whilst Clock Choke’s furious barrage hits like a brick in the teeth and reminds me of the fearsome Cold As Life.

Frontman Roman Schnecker’s distinctive canine vocals boil over with a barely contained hostility, like a frenzied junkyard dog straining at it’s chain. His delivery raw throated and unrelenting, homeboy is breathing fire no doubt. Lyrically there’s very little introspection here, its an outburst of pure venom, an adulation of straight edge defiance. Think Chorus Of Disapproval levels of disdain. The scorn is real. 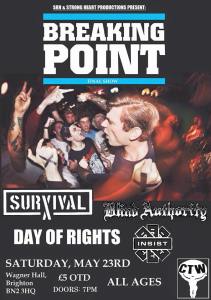 I have said it so many times that I am bored of hearing it but for my money Dave Mayes is one of the best drummers in UKHC. Constantly demonstrating a rare creative flare behind the kit that adds intensity and texture to the material without disappearing up his own arse. DBC, fresh from his stint with Breaking Point, lays down some flavour with a couple of face melters that embellish, but never dominate nor wander into wank metal territory. Simpson and Pedro are no slouches either bringing solid rhythm and a jackboot crunch to proceedings. And whilst the level of ability on display here is impressive, there’s a sense of brooding violence and grim determination seething beneath these songs that gives Day Of Right’s the edge over their peers.

The whole demo is wrought from iron. There’s no respite, no bullshit, no weak links, no bogus spirituality, no empty rhetoric. Just five songs of punishing, hateful straight edge hardcore, and that is what I am all about. SRH. Fuck you.

Check it out HERE