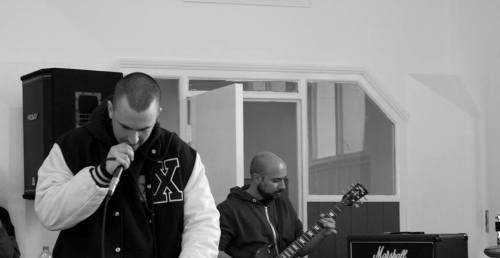 London based Straight Edge band Guidance put out a great 7” last year through Anger Battery Records entitled Age Of Vice. Drawing very obvious inspiration from the New Age Records bands of the early 90’s, it was equal parts Strife circa My Fire Burns On and A Light In The Dark era Outspoken. Age Of Vice really impressed me at the time with it’s solid songwriting and accomplished musicianship but most importantly because it had some fucking soul and I was excited to see how the band developed. Fast forward 18 months and Guidance have sadly packed it in despite recording what I consider to be the BEST 90’s influenced straight edge record of the past decade, Path Of Grace. Currently this record is unreleased, but is available to listen to for free HERE

This record is an exercise in perfectly conceptualized and executed hardcore. Metallic without being ‘metal’, spiritual without resorting to preaching, emotional without feeling contrived or soft. There’s power and ability here, the kind of anthemic build ups that make the hairs on the back of your neck stand up, collapsing into monstrous breakdowns that would wake even the most reluctant of yesterdays pit giants from their slumbers. Haunting acoustic guitar interludes sit comfortably between sheets of shrieking dissonant guitars and pounding drums, it’s a similar dynamic to that employed by Resurrection or the first 108 record.

Vocalist Charlie has some real urgency to his delivery, his voice breaking beneath the strain and again reminds me of Rob Fish. A lot of bands claim 90‘s influences but often come across as an awkward mish-mash of poorly executed musical cosplay. Path Of Grace is a record that feels real to me. It makes me feel like I did when I first heard Undertow’s At Both Ends LP, like I wasn’t the only person who felt rage and disgust and anxiety at the  state of the world.

Themes addressed in the lyrics stray from the usual cliche straight edge subject matter and demonstrate some existential questioning and consideration for matters beyond the flesh that really impressed me. ‘She’ looks at misogyny whilst in ‘Stand Against’  the subject of addiction is tackled in a contemplative manner rather than the hard nosed approach of the likes of Day Of Rights. False Prophet reminds me of Outspoken’s ‘Current’ 7” with it’s defiant melancholy and flowing bass lines.

There are criticisms though. The production is paper thin, the guitars lack crunch and the drums sound like they were recorded on a dictaphone. Nothing a decent mastering job couldn’t rectify however. The other short coming here for me personally is that the stench of Krishna hangs around this band like stagnant incense. Maybe it’s just the artwork or Charlie’s decidedly Fishy vocals that elicit these feelings from me, regardless it’s a minor criticism of what is an incredibly complete recording.

We live in a time where hardcore is undeniably larger than it has ever been before it is inevitable that dilution of purity sets in and the essence becomes harder to find. UK straight edge is bigger than I could have ever anticipated it becoming when I was cutting my teeth back in 1994, to the point where it’s large enough to foster sub scenes within the straight edge scene. Whilst the bare knuckle 80‘s approach of Violent Reaction and True Vision etc has clearly captured the attentions of the former colonies whilst Day Of Rights, Survival, Insist etc all speak to different quarters, I think there’s room for something that asks the bigger questions, a spirit that burns with a genuine anger.

I believe Guidance possess those qualities in abundance and I implore…no, fuck that I DEMAND that they work through whatever challenges thwarted them in the first place and take up arms again because I believe UK hardcore truly needs this bands voice

One response to “Guidance – Path Of Grace”