With Hardcore Veteran Tim McMahon on vocals and a few other familiar faces through out.

Ex members of Floorpunch,Turning Point,Release and more, this is the first interview conducted with Tim about this new great project.

TM: Good man, keeping busy as always. Between work, my family, this new band and still pushing ahead with the Double Cross website, my hands are pretty full. No complaints though. I’m more than happy to be filling my time with all these good things.

DR: Let’s get right into it, so when did the idea for Search come about?

TM: Well I’ve been talking to Turning Point drummer, Ken Flavell, about doing new music with him for a while now. Ken hasn’t really played drums since Turning Point broke up but I knew he was still Straight Edge and still interested in playing hardcore. It was just a matter of him finding the time. January 1, 2016, I was hanging out with Release / Floorpunch guitarist Chris Zusi watching the Ohio State / Notre Dame game and I happened to pop on Facebook and see a pic Ken posted of himself playing drums and it said something about how he was “knocking the rust off.” I commented on the photo, saying something like, “get ready, let’s do something” and Ken responded saying he was down. Now out of all honesty there was no real plan. It was just us lightheartedly going back and forth and hoping we could make something happen. I hadn’t mentioned anything to Chris Zusi about this Facebook thread conversation I was having with Ken but on my way home from Zusi’s house I saw these comments popping up on my phone. Zusi saw the thread conversation Ken and I were having and chimed in saying he was down, then shortly after that, Ed McKirdy chimed in on the same thread saying he was down as well. By the time I got home, us four had started a text message thread and the idea to do this band was actually forming. It quickly went from being a lighthearted conversation between Me and Ken to having a full band, all within a couple of hours.

Unfortunately, we were all tied up throughout January and February but planned for a practice in early March. Not too long before that first practice Zusi mentioned bringing a second guitarist into the picture and said that he thought Floorpunch guitarist, Bill Hanily, would most likely be interested. We all agreed that Bill would be a good fit so he was asked and he joined prior to the first practice.

DR: How many practices have you done and how have they been so far?

Has it felt different from your other start ups?

TM: As of today, April 24, 2016, we’ve had four practices. Our first practice, March 12, 2016, which was only two hours, produced two songs. Granted, we had been emailing riff ideas back and forth for the months building but I think we were all pretty surprised how well we all jelled and were able to put together two solid songs in such a short amount of time. After that first practice, we didn’t practice again until early April, but again two more songs were written. Throughout April we’ve gotten on a much more regular schedule and have been practicing every weekend or at least every other weekend. As of today, we’ve got six complete songs but plenty more riff ideas in the mix.

As far as how this band’s start up has differed from any of my other bands: I think we’re all at a point in our lives where we’ve got this thing down to a science. There’s an incredibly professional yet fun vibe. All five of us have done multiple bands, we’re all in our forties, have been into hardcore for close to thirty years, we know exactly what we want to do and how we want to do it. We’re extremely focused and all on the same page.

I think we all also know how we’ve got something special here with this line up. With Chris and Ken having their Release and Turning Point history, Ed and I having our Mouthpiece and Hands Tied history and Bill having his Floorpunch history, we’ve all had a pretty significant part in this whole New Jersey Straight Edge thing and it’s unique to be able to pull all this history together into one band.

DR: How are you approaching the writing side of things?

TM: So far, musically, it’s been a pretty good mix of Zusi and Bill writing the songs. Ed has also contributed, as has Ken, but the bulk of the song writing has been Zusi and Bill. Zusi and Bill basically come up with riffs and song ideas, record them, and email them to all of us. We all listen to them, make suggestions, and then piece them together into real songs when we practice. Lyrically, I’ve written everything as I usually do with all the bands I’ve done. I’ll listen to Zusi and Bill’s song ideas that they email us and loosely write lyrics around the guitar riffs. Once we’re all together and those four are creating full songs, I work my lyrics into what they’ve come up with. There’s been no real discussion or plan as to what we wanted to sound like, we just did what came naturally.

DR: Who came up with the name and what’s the meaning behind it?

TM: Finding a name has probably been the most difficult task to date. We have easily thrown back and forth well over a dozen different names between the five of us. At one point, it felt like it was going to be impossible to please everyone. Then one night my wife Traci said to me, “what about SEARCH?” SEARCH had been a band name that Ed and I had tossed around in the early 2000’s prior to us doing Triple Threat. I liked the name but had forgotten about it. I asked Ed what he thought and he loved the idea and couldn’t believe we hadn’t thought of it earlier in this new band name discussion. I then messaged the rest of the guys and surprisingly, they all agreed, so that was that. It almost felt too good to be true.

As for the meaning behind it, I look at what we’re doing with this band as a never ending SEARCH. We just keep pushing on, continuing to do what’s made us who we are and what’s basically become ingrained in us. We’re never satisfied with what we’ve done, we keep searching for better and moving ahead.

DR: What bands are you guys listing to and drawing influence from for Search?

TM: I’d say the main influence that we’ll all agree on would be Youth Of Today. I think to all five of us they are the single most important hardcore band of our time. I think the Cro-Mags have also played a roll in our influences. I hear a mixture of other bands as well (both east and west coast) when I listen to the songs we’ve written so far but I think we’ve pulled it all together in our own way.

DR: When can we expect a bandcamp or demo?

TM: We have a bandcamp site up right now, but haven’t really pushed it yet because all we’ve got up there are a few practice tape recordings. We’re still in this transition period where we’re not really sure what our next move is. We’ve gotten offers from a few record labels, we’ve sent practice tapes around a little bit, we’re just not sure exactly where we’re going to go and how we’re going to do it all. A demo is a possibility, going directly to a 7” is also a possibility. Time will answer all our questions. We’ve just got to stay patient and focused on the big picture.

DR: You guys hoping to play out pretty soon then?

TM: We’re definitely hoping to play out soon. There’s been a handful of show offers coming in, but so far, nothing for months. It seems like the smaller one-off type shows are a bit less these days and it’s more so about the big fests. We’re just eager to hit a stage and do this in a live setting but I suppose the more time we have the better. For now, we’ll just concentrate on writing more material, fine tuning everything, getting tighter, and hopefully figuring out how and when we’ll do a record.

DR: How have the last couple of Mouthpiece shows been?

TM: The last couple of Mouthpiece shows we’ve played have been great. I’ve said it before, but I honestly feel like this lineup of Me, Chris, Jason, Matt and Ed has been the tightest we’ve ever had. We’ve got good chemistry, get along great, everyone is at the top of their game, have loads of fun and really appreciate still having the opportunity to play those songs. 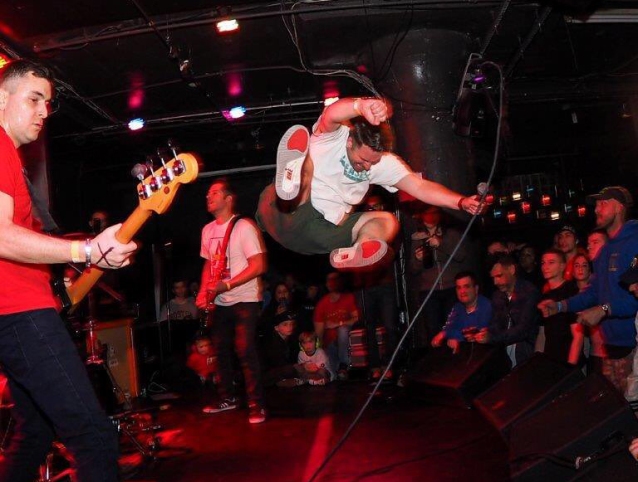 The downside of all this Mouthpiece activity is that we can’t do more with it, there’s limits to it. Matt lives in Indiana while the rest of us live in Jersey which makes practicing close to impossible. Matt will drive up or fly in when we have a show, but it’s a quick practice before the show and that’s it. We end up with a band that plays once or twice a year and doesn’t get together enough to write new material so it’s a bit unfulfilling. 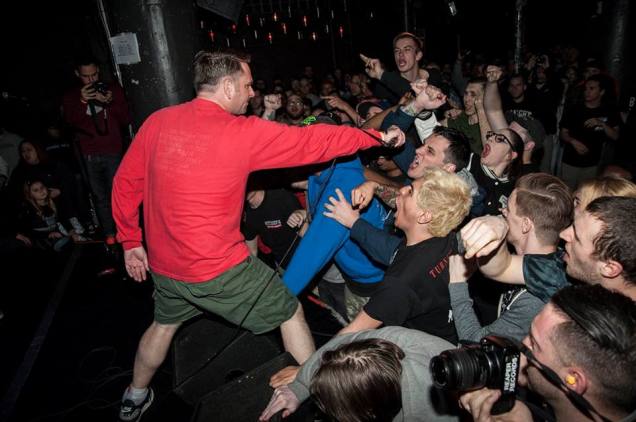 DR: You said the show with AN could be the last Mouthpiece show, is this true?

TM: I’m not sure if that American Nightmare / BURN show was our last show, but I knew going into it I was going to want to concentrate on SEARCH and that SEARCH was going to be my priority. It’s not like we were ever actively seeking out shows to play with Mouthpiece, we would simply get asked and if it made sense and worked for all of us, we’d make it happen. With SEARCH happening now, I want to put all my focus on that. I want to be in a band that’s actively writing new music and looking to play regularly. I don’t want to have limitations placed on us. 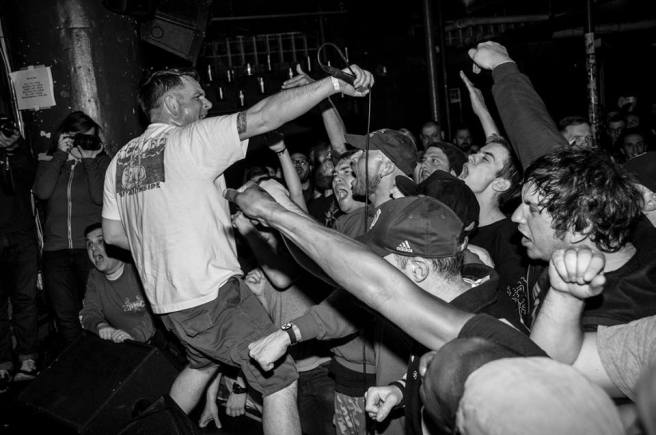 Mouthpiece will always have a place in my heart and always be important to me and I suppose if the right situation is presented to us and we all agree upon it, we could play again. But especially now, I want to place all my focus and energy into SEARCH.

DR: Thanks for your time dude, you got anything else you want to add?

TM: Thank you Ed for doing the first SEARCH interview and constantly lending your support to my bands and Double Cross; it’s all very much appreciated. For everyone who is interested, keep your eyes and ears open for SEARCH in 2016.