Had such a great time talking with Brian over the last few weeks, Battery are one of my all time favourites and one of my closest friends also feels the same way about them.

Needless to say seeing them In just over a week will be killer.

Thanks To Adam at Rev for Help as always.

DR: So where are you right now and what are you up to?

•I am living in Baltimore. I took a break from doing Salad Days full time. I still do mixing, mastering, and some music production, but on much less regular basis.

DR: Yea so you have slowed with Salad days now?

What bands have you recorded there that we will know?

•Most recently, Praise, Turnstile, and Angel Dust, but over the course of the studio; Texas Is The Reason, Thrice, Bane, Moneen, Converge, Darkest Hour, Count Me Out, Strike Anywhere, Hot Water Music, Engine Down, Senses Fail, Milemarker, Circa Survive, The Explosion, In My Eyes, Piebald, The Movielife, From Autumn To Ashes, Cave In, Ten Yard Fight, Frodus, Emarosa, Fireworks, Polar Bear Club, Balance and Composure, Hot Rod Circuit, Fairweather, and a ton of other stuff that I am forgetting right now. I have been incredibly fortunate to have worked with some amazing bands. 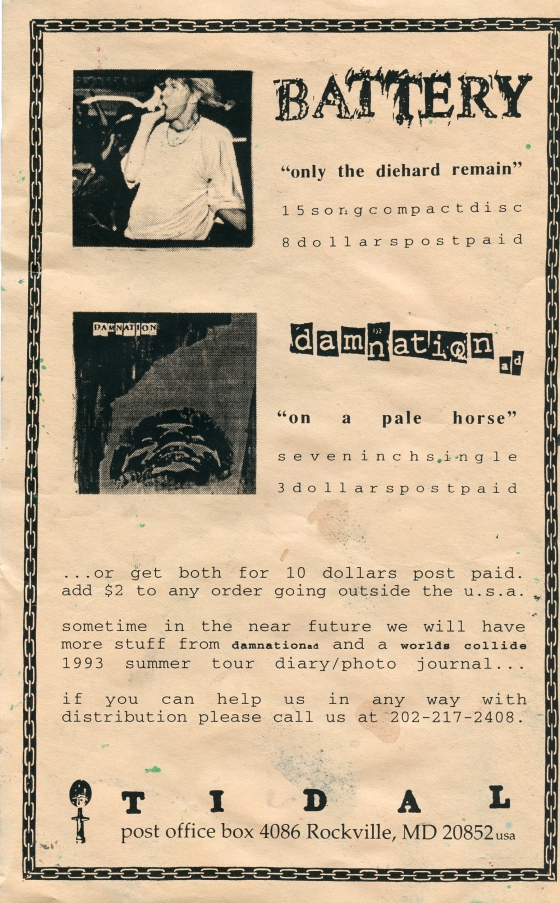 DR: Do you want to give us a brief history of Battery? What other bands did you guys go on to do?

•Battery started in 1990, when I was in eighth grade. Very soon after our first show, my life started falling apart. I was incredibly depressed, getting in fights, and ended getting kicked out of school. It got so bad that my parents put me in a mental hospital.  When I got out, Ken and Zack had decided to move on and start Worlds Collide, and I ended up starting  Ashes. In 1993 I found out that Lost and Found had released the original Battery stuff and that it was selling really well. They offered to pay for us to make a record and come tour in Europe. I dropped out of high school and we started doing the band again. For the second record, we wanted to have a label in the US, so we talked Dennis Remsing, who had put out the Ashes records, and recorded Until The End for Conversion Records. I can’t totally remember how we ended up on Rev, but I think that Ken got to know them through doing Better Than A Thousand. We recorded Whatever It Takes for Revelation, and broke up 6 months after its release.

DR: How did it come about that you guys decided to play shows again?

•We were asked to play Damaged City Fest in DC, and I thought it would be fun to do. I love the new wave of hardcore/punk bands, and it’s been awesome to see how vibrant the DC scene continues to be. I had worked with Praise and Angel Dust in the studio, so I loved getting to play with them. While we were getting ready for the DC show, Rev asked us to play REVfest and the timing made sense.

DR: Battery did actually play the Rev reunion dates back in 2012-  how was that?

•We did… It was great! It was cool to play, as well as to see so many friends that I hadn’t seen for a long time. 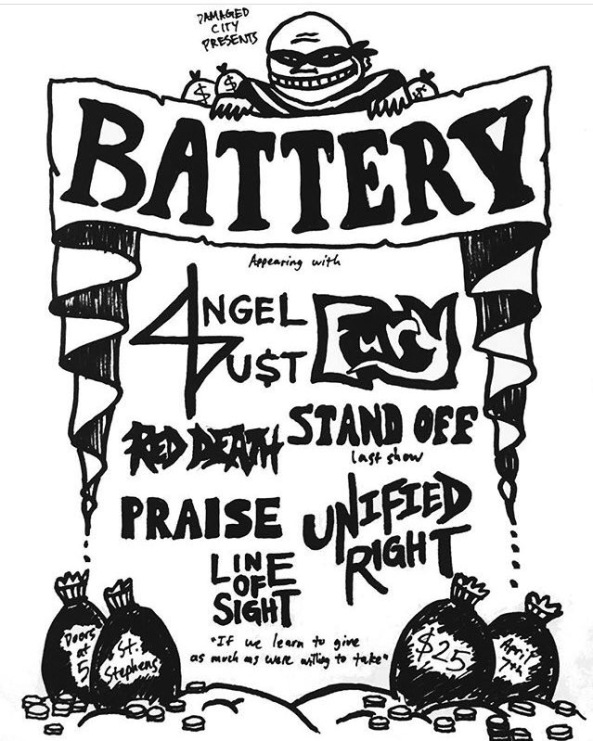 DR: How was it playing those songs again with Battery?

•I love hardcore, I love playing music, and I still feel an incredible connection to the songs. It’s been really fun, and it’s also been a great excuse to be in contact with so many people that I had lost touch with.

DR: How was it writing new music after such a long hiatus?

•Surprisingly, it’s been total easy and natural. Ken has a cool style of writing, and I have always had an easy time coming up with vocals to his riffs. It’s very freeing to not be worried about getting bigger or signed. I just want to make hardcore music that feels honest and makes my heart beat a little faster. 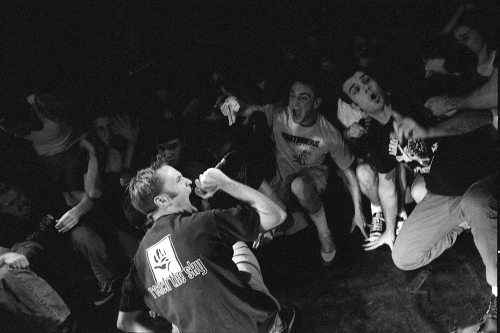 DR: How was the recording process?

•Recording was fun! We did it with my friend Paul Leavitt. It was nice for me to be on the other side of the glass again. It was the first time I had been back in the studio recording as an artist in almost 20 years. I wasn’t sure how my voice would hold up, but I did ok.

DR: You’re donating the proceeds of the new comp to a charity, right?

•The proceeds of For The Rejected By The Rejected, as well as the downloads of My Last Breath will all be going to the Center For Infant Child Loss in Baltimore. Our dear friends Paul Leavitt and Mike Mowery both lost infant sons, and we wanted to support an organization that helps people deal with that unimaginable loss. The support has been amazing… We have had people pay over $100 for the single track on Bandcamp.

DR: Did you feel that Battery wanted to be involved with the current scene, with you being involved for so long? Seeing flyers with some of the other bands you’ve been playing with, Battery doesn’t feel out of place for me.

•We don’t have much of a plan, except that we want to play with bands we love and bands we are friends with. I don’t think it feels out of place, because we have all been so involved in the punk/hc community throughout our lives.

DR: Super rad you guys will be in Europe soon, I guess your stoked right

•I am sooooo stoked for Europe!!!!  Going to Europe with Battery when I was so young shaped me as a person. The support and success we had there made me believe in myself and gave me the confidence to stick with thing like Salad Days that I may have never followed through with otherwise. There has always been such a vibrant scene and deep love of music in Europe, and I never thought I would experience that again. We made lifelong friends there and it’s so nice to have a reason to be in regular contact again.

DR: Which DC bands do Battery take influence from?

•I am a big fan of Rites of Spring, Embrace, Soul Side, and they are huge influences for me. I was also super influenced by Four Walls Falling, which always felt like a local band, but was from Richmond. I think that Ken was always in to the DC stuff, but was more influence by the NYHC stuff, like GB, YOT, and Judge.

DR: What bands have you been listening to a lot recently?

DR: What does the Straight Edge mean to you and what do you think about the scene in general in 2017?

•I am no longer Straight Edge, but I still feel an intense connection with Straight Edge and Hardcore in general. Shows were the first place I didn’t feel like a stranger, and the kids I met through music inspired me, and made me believe in myself for the first time. I credit Straight Edge for saving me when I was younger. I was very troubled when I was a kid, and if drugs and alcohol had been thrown into the mix, I would probably be dead now. It never felt like a set of rules for me, it was more of a lifestyle and community….  A moral compass that I still follow to this day in many ways. I got to point where I felt like I was living to uphold other people’s expectations, and that didn’t fit with what drew me to punk and hardcore in the first place. I am very proud of the time that I was Straight Edge, and I also have no regrets about how I live my life today.

DR: What does the future hold?

•TBD. We are writing new music, with the hopes of making a record. I feel really really good about how the songs are coming out, and they will dictate what the future of the band holds. 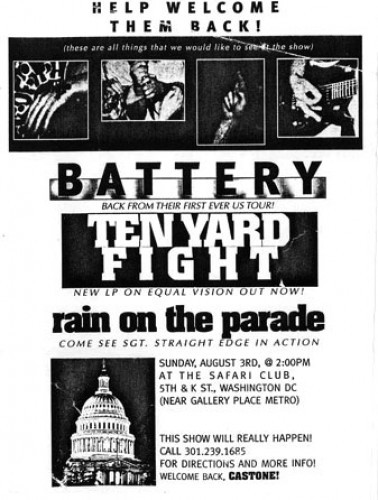