Red Death is a New band out of DC do not sleep on them!

I sent a few questions to Nick to see whats up.

DR:  Whats up Nick, where you at? What you been up to?

NC: Hey Ed! What’s up? I’m currently at my house in Northeast DC, where everyone in Red Death currently lives. I just got back from 6 months of touring a few weeks ago. I’ve been trying to get re acclimated with normal life and find a new job, but instead I’ve been busy with punk shit!

DR: So how was Red Death born?

NC: Like I said, everyone in Red Death lives together in a huge group house. The idea was spawned by our mutual love for COC, Discharge, The Accused, and The Cro Mags. We started jamming in the dining room and then we later took it down to the basement. From there we practiced alot, recorded the demo, and played our first show back in April.

DR: The Demo is killer, are you guys happy with it? How/s it been received?

NC: Thanks! Yeah, we’re happy with it. There are always things that you wish you could change after the fact and wish that you played a little differently, but overall I’m really pumped on how it all happened and came out. I think people have dug it, which is really cool. We didn’t expect anything.

DR: Didn’t you play with Chain recently? That’s pretty fucking rad. How was that?

NC: That show was cool! We had an even better time hanging out with Chris, the drummer of Chain, who stayed at our house for three days before the gig. He’s a wild guy with insane stories. What a bad ass. Show was cool though, yeah.

DR: How have some of your other shows been? Who have you been playing with?

NC: Our other shows have been rad. We’re trying to make it a point as a band to play a good cross-section of gigs… punk, hardcore, metal, everything. Our first show was with INFEST so we’re a little spoiled, hah. I’m really excited to play with REPLICA from California in three days. That’ll be cool.

DR: What sound is Red Death going for? What inspirations run though the band?

NC: I would sum it up with COC, ACCUSED, CRO MAGS, DISCHARGE. There are som other influences, but those are the big four for us.

DR: You’re in Coke Bust and Sectarian violence too, right? What other bands do you play in? What do you do for work outside of the bands?

NC: I play drums in a new band from DC called “Sem Hastro.” I play bass in a band called Correction and a band from Uppsala, Sweden called “Smartsam Utlosning.” Right now I’m between jobs but I’ve worked as a freelance writer in the past. 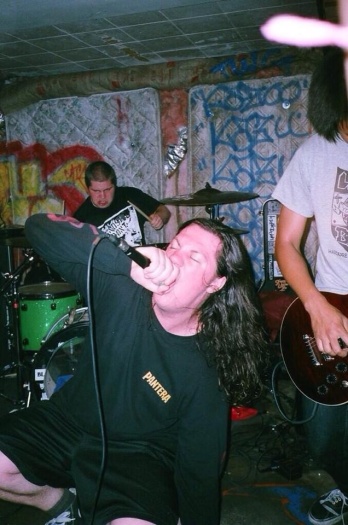 DR: How far do you think you will go with Red Death as in tours, records etc?

NC: Red Death will do an LP early next year. It’s actually already mostly written and ready to go. Once we do that we are going to step our touring game up, we’ll hit the west coast, and then we’ll go to Europe.

NC: No. Half the members of Red Death are straight edge: me and Connor (drums).

DR: What are your top 3 personal favourite HC records?

DR: You wrote to me in Swedish in one email, how come you know Svensk? you also mentioned that you love Sweden, what do you like about it and where does this stem from?

NC: I am in the process of learning Swedish. I love the culture, the music, the people and the language. Staffan from Sectarian Violence/Correction was the first Swede I ever really met and he was super cool. We later went on to form the band (SXV) together. This led to me hanging out in Sweden, meeting other Swedes, etc. Eventually I got around to traveling within the country a bit. I’ve just always had a blast up there.

DR: Will Red Death be coming to Sweden and Europe any time soon?

NC: Thanks for the interview!