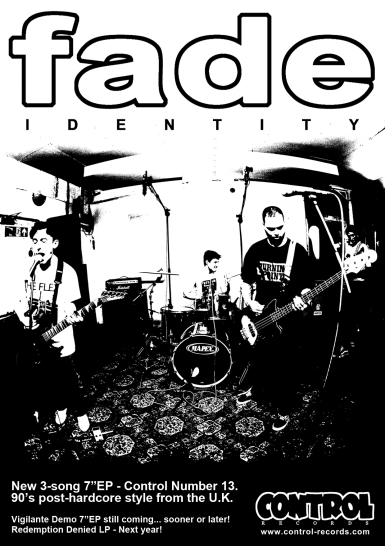 FADE ‘identity’ 7″ EP available to order NOW!
Control Records is excited to be releasing “Identity”, a brand new 3 song EP by England’s FADE. While the band consists of members of bands like Shrapnel, Violent Reaction and Higher Power, FADE definitely operates in a different part of the spectrum. These recordings see the band developping their post hardcore sound further, drawing influences from bands as Quicksand, Godspeed and Big Collapse. “Identity” features two new songs and a cover of the often overlooked Memorial Day (post Turning Point). Again a limited pressing of 100 copies on colored vinyl for mailorder only and 200 copies on black vinyl are available here: http://controlrecords.bigcartel.com/ Spread the word/repost and support!

Since I got into hardcore, I always had a problem with the nineties era. From the Youth Crew revival, to the chug chug metalcore, groovy NYHC or emo, I can’t find something that I despise or find lame, neither the bad taste, the imagery, the sound nor the political awarness in the scene. As you may know, I really want to built a time travel machine, just to live this era a little bit. Maybe it’ll disgust me,  but you can’t be sure if you didn’t try.

For the last few years, it seems my need of this said machine is compromised by the wave of new bands playing this brand of hardcore, but an enhanced version. Like they stutied how amazing it was and decided to improve how good it was. And believe me, in most case it’s really well done.

Higher Power is one of those bands nailing the nineties sound, by mixing the best of LEEWAY and DISTRICT 9.  Just this once, they’re coming from the UK, where every of those killer bands are coming, and they share members just to show you how you don’t need many people to create an army of great bands.

Check out the review made by my co-autor NathanxBean on this site, then here’s a short interview with Jimmy Wizard about his new tricks.

END_OF_DOCUMENT_TOKEN_TO_BE_REPLACED 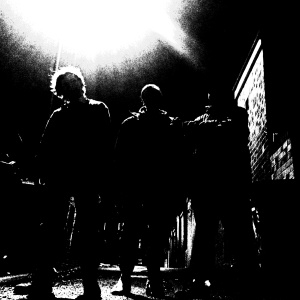 Higher Power are YET ANOTHER example of how Leeds does hardcore right in 2015. Whilst the city is perhaps best known for it’s Boston/’82 style bands like The Flex, Violent Reaction, Obstruct etc the creative milieu bubbling away in the student ghettos is clearly a fertile environment for all types of underground activity. With members drawn from the recently departed Abolition and Bleak Reality, HP’s sauce is a logical extension of those culmulative influences. Just take a casual listen to their demo (avilable from Neutral Words Records) HERE and it ain’t hard to recognise where they are coming from.

Vocalist Jimmy Wizard (yes that is his REAL name) could quite easily tip up on the next season of Stars In Their Eyes, why? Because his vocal impersonation of Ezac is absolutely spot on. For real, when I started listening to the demo I had to stop it and double check I hadn’t put a Crown Of Thornz tape in the deck. For those who are not familar with that reference point let me enlighten. Higher Power clearly take inspiration from that branch of New York Hardcore that was not afraid to temper aggression with melody and create some almost spirtual sounds. Jimmy’s vocals are crystal clear, raw but still tuneful. Nailing a style that stretches the vocalist behind screaming and shouting is not easy, if it aint dead on it sounds bloody awful. This is not the clumsy attempts at sung vocals we are so often subjected to by mediocre bands trying to switch their shit up, nope my man is putting some SOUL into these train yard blues. 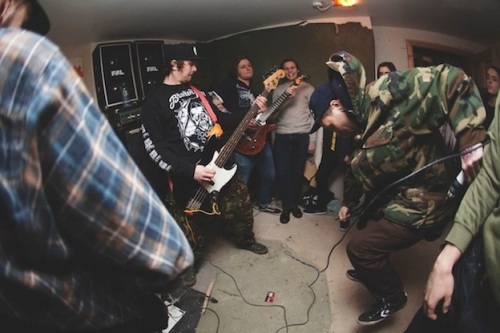 Musically Higher Power do not play around either. There’s a solid rhythmic backbone at work here, keeping the grooves tight and your head bobbing. This demo is infested with crunchy memorable riffs and inspired song structures that twist and evolve as the songs progress. Sure it’s melodic in places but that don’t mean its soft. Cold Front were not soft. Maximum Penalty were not soft. Crown Of Thornz were not soft and Higher Power sure as Hell ain’t soft. Goddamnit, that sick thugged out groove in third song Twisted Vision is pure Mike Dijan perfection. And that solo midway through opener Peace is so fucking LIFTED it takes the actual piss. 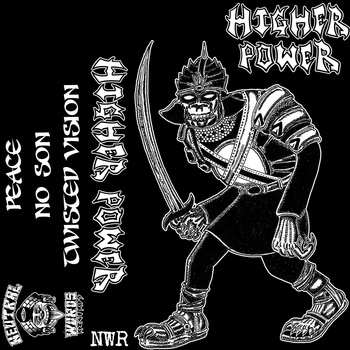 And in spite of all the obvious NYHC references peppered throughout this demo there’s some other interesting stuff happening here….the massive breakdown in No Son for example reminds me a lot of the Four Walls Falling song Fall Of Rome and that is no bad thing. I have been rinsing these songs all day and I am still tripping off how perfectly conceptualized and executed this demo tape is.If you like what you hear and are interested to learn more, get linked up to what HP are doing HERE Personally, I cannot wait to see where this band goes next because yo three songs just ain’t enough.