Making The Worst Of It : Clocked Out

If there’s something I always loved about Scotland, it’s their accent. It’s like speaking from someone out of Quebec when your French. It’s also a big issue for me, since my ears have an American accent as standard, and believe me there’s a huge difference between the two. That huge difference made me feel a bit confused when I first spoke to CLOCKED OUT, as I would have used a translater really.

They played in Strasbourg last April, with an Italian band called STORM {O}, and we oppened for them with one of my bands. Neat show. Those guys are crazy on stage and damn funny in general. Since I first listened to them back in 2013, I wanted to do an interview somehow, but I never went further the idea of it because I was way more lazy than I am today. So when I knew I’d see them, the idea struck me back and I’m glad I could do this face to face.

After the show I sat outside the venue with them four guys, and a bunch of other people. Crawford (singer), Tony (Bass), Paddy (drums), Mick (Guitars) and myself, on the floor like damn hippies. And their accent. It was a harsh task, but after some times struggling, here it is, their interview.

END_OF_DOCUMENT_TOKEN_TO_BE_REPLACED

MERCY dropped their bandcamp link like a week ago on a FB group. The fact that this band sounded very different from the late bands I’ve listened to really attracted me for several reasons mainly because they can bring a really groovy aspect while going into pretty evasive spaces without being sketchy, I guess it’s because of efficient recordings and good production. Anyway, keep an eye on this band, folks! 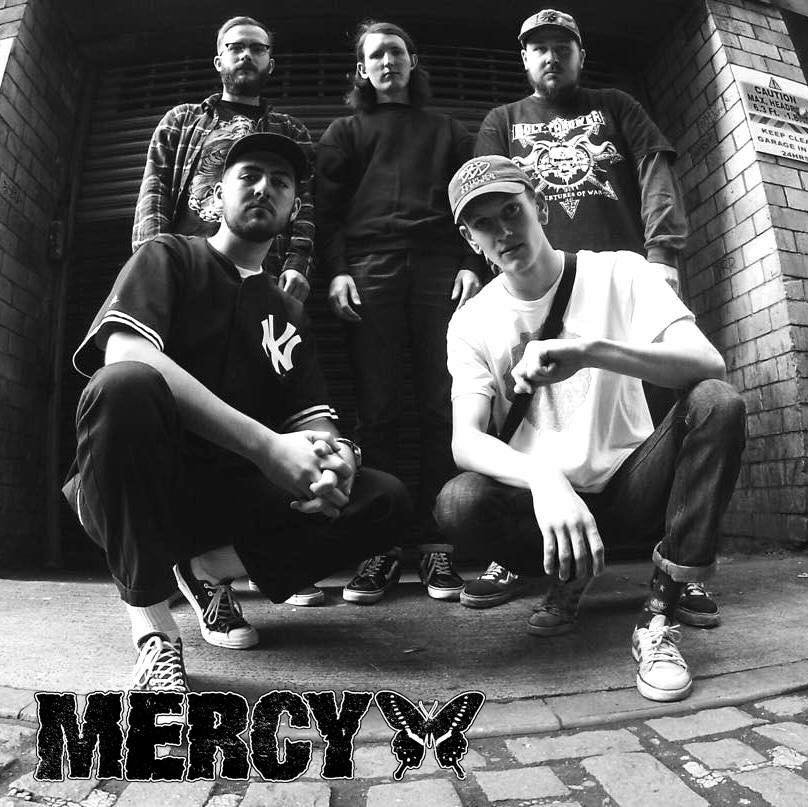 END_OF_DOCUMENT_TOKEN_TO_BE_REPLACED

Rodney is like the William Wallace of Scottish punk music. (NB: always start a topic with a bad joke, a historical reference no one actually gives a fuck… What the hell, nobody told you this at Web Blogging University? Nevermind, go to hell…)

Yesterday I recieved a thankful e-mail from the same Rodney about a previous article I wrote for DxR several months ago concerning his different bands including XSAXONX. We agree to make an interview in the following hours and here we are – scuse me: I have to flip that TURMOIL LP I’m listening to right now…

Hey Rodney, thanks for according your time!
First of all, please introduce yourself: how and when did you get involved into the punk and hardcore thing?
Hi Jean, yes my name is Rodney, I’ve been involved in the hardcore underground for 13/14 year now. I listened to 70’s/80’s punk and metal as a teenager and was always searching for more  stuff. Discovering the band Active Minds was a turning point for me, they had a booklet in one of their lps which basically told you how to do everything in a DIY way – so I gave it a go! The first band I asked to come tour Scotland was Active Minds!
How was the scene at that time in Scotland? What about nowadays – let say from the BAY CITY ROLLERS to Susan Boyle by way of THE EXPLOITED? (Yeah I think we can refer to each ones since you “cover” both MANOWAR and TOTO, love & hate have NO boundaries, folks!)
At that time I was still living with my mother in the countryside and didn’t have access to the ‘scene’. I moved to Dundee around 2002 and myself and some friends started to book gigs almost every month, we created our own scene, but we had no ‘taste radar’ we put on any ‘punk’ band which asked so we did everything from pop punk and emo to grind and 77 pogo – great times. At that time I drank a lot and we just had a party for pretty much for 2 years.
I dont have many regrets in life, but one that comes back to nag me a lot is that I missed Manowar when they played here 3/4 years ago. The concert was on a Tuesday, I was working 60 miles away and had no car. I should have pulled a sick day…
XSAXONX… What a name! Tell me more about that choice!
Saxon is probably my favourite band, my first albums which were ‘mine’ were a gift of Crusader and Power and the Glory on cassette tape – both no longer work as they have been played too much. When I started going to concerts I would should ‘Play some Saxon’ as a heckle to the bands. On three occasions the band has then burst into a Saxon song – Municipal Waste, Hell Shock and J’ e men Fous – good times! When I went to start this progect it seemed like a fun idea just to name my personal progect after my favorite band.

How do you describe your music? It reminds me a lot of things like early-THE ACCÜSED/CORROSION OF CONFORMITY…

I’ll take early COC, good stuff. The idea was to sound like a cross between Active Minds, Seein’ Red and What Happens Next? – three awesome SxE hardcore bands

Who are the guys behind XSAXONX? What was the main idea when you started the band besides the fact that you wanted to play a fast and aggressive music?

So the original idea with xSAXONx was a fun band with the guitarist Saxon Warrior. We would write an EP and record it just the 2 of us, then we would enlist people to play live with us when we played live. Before our first concert we already had a full time bassist however in Nips, but we never had a full time drummer – most notably Dan from Lotus Fucker (USA) played with us in South East Asia and Atilla from Crippled Fox (Hungary) played with us in the UK and Budapest.

Can you describe your several releases?
The first EP was written in a few hours and recorded mixed and mastered in an afternoon. I spent a lot of time n the art and the booklet and I think it stands up as a great release. The second EP and split were written over a much longer period of time and the recording process was far from perfect, we changed studios and the new engineer did not know how to record hardcore punk, and I think that came across in the final mixes – not quite as punchy as the debut.
I still have some copies of the cassette EP’s if your readers are interested, we also have bandcamp.
Everything was released on one CD for the South East Asian tour, 300 copies I think. It sold out on the tour.

What about your South East Asia tour?

This was the second time I had toured Asia, the first was with Atomgevitter in 2011 so in a lot of respects I knew what to expect and was just looking forward to catching up with old friends and enjoying the food and culture. We did a lot of gigs like 14 in 15 days or something crazy, I think we had one laundry day! The best concerts on that tour for me were the Chaos in Ruma Api fest in Kula Lumpur where we played with a lot of great bands, The Substation in Singapore where again we played with great bands to a fun audience and Jogjakarta in Indonesia where every single support band was killer – very strong scene in Jogja.
Some bands to check:
Headcrusher
Exhumation
Life Lock
Scumraid
Fireyjak

Will you tour in 2015? Or release a record?
No mate I’m afraid the band isdissolved at the moment, doesnt mean we wont be back but we are all involved in other bands at the moment.
me: Thisclose – Discharge style hardcore, USA tour July 2015
Nips: Thisclose and Gluerash – early Poison Idea worship
Saxon Warrior: Canibalised – Cannibal Corpse worship, Hungary tour May 2015

If you don’t mind I’ll tell you that the first time I listened to your 11 tracks cassette, I thought that the way you’re singing is like Ian MacKaye’s (no matter if we deal with MINOR THREAT, FUGAZI, EMBRACE or EGG HUNT…), you’re not singing: you shout, in a savage, primary way, like if you were inviting everyone to create havoc! In my opinion, this is how we should play hardcore punk. What’s your opinion about that?

Yeah, I’ve never really been into ‘posi-core’ – I come from more of a peace punk/anarchist back ground and came to sxe through that way of thinking. I think a lot of the traditional straight edge stuff comes from quite a conformist perspective and its not something I feel I have much in common with, I’ve always been a weirdo/outcast.

I know you’re straight edge, maybe not in the “posi-core” point of view, more in a “punk spirit” – what does the song “Breaking the Edge” refers to?

Breaking the edge is about people who try too hard to cover up there insecurities, for example adding vegan as a prefix to everything: ‘I had a vegan sandwich’ ‘I had a vegan coffee’ etc. I understand that feeling, and remember it well, wanting to feel comfortable in my new lifestyle, but just relax, your vegan, that’s a good thing, you don’t need to tell the world about it every second of the day, you’ll just alienate a lot of people.
The song is also about the vegan/sxe police – if you have some cake with egg in it because your Gran made it you should be burnt at the stake, ou sipped a glass of champagne at your best mates wedding – prepare to die! To me it just seems a really infantile attitude. Life is never black and white and sometimes we need to roll with what she throws at us a little.

You told me that you were maybe less than 10 straight edgers in your scene. Is that important for you to have such a scene in Scotland? I know shit about how important whisky is for Scottish culture but, as I come South-West France (wine and shit you know…), people often refers to that like a important aspect of our culture – which I don’t give a fuck actually!
Drinking is a massive problem in Scotland, the punk scene no exception. There is no sxe scene, there are some folk who are sxe or do not drink, but we don’t hangout together discussing the different pressings of early Dischord records.
Its important for me not to drink or smoke, waste of money and time – life is too short, and I’ve wasted enough of it already.
What do you think of the current straight edge thing going around the Internet? It’s like living a hardcore way of life today means much if you are 20, have tats, and lifting tons of cast iron (“squat or rot”)… Don’t you think it has nothing to do with the original thing?
I don’t identify with that sort of thing at all, as I said before I come from a punk and heavy metal background. having said that I go to the gym 2 times per week, run three times and do push-ups in the house everyday! – healthy body healthy mind.
Can you recommend some newest Scottish punk bands?
Gluerash – sounds like Poison Idea
Hellripper – sounds like Toxic Holocaust
New Age – sounds like Blitz
Clocked Out – sounds like thrashcore
Headless Cross – sounds like doom/psyche
Thisclose – sounds like Discharge
Murderburgers – sounds like Ramones
If you wanna add something…!
Cheers for the interview, please check out our music, you can download it all for free from the bandcamp.